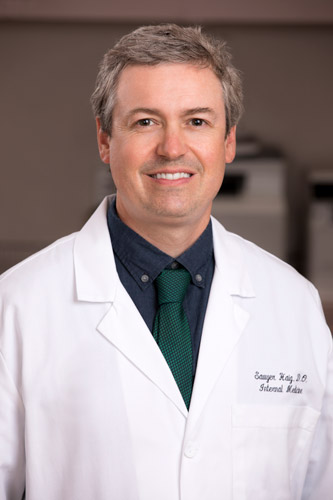 Dr. Haig earned his undergraduate degree in Geosciences from Williams College in 2000.   After researching lava flows at the Hawaiian Volcano Observatory, his love of science and caring for people led him to his passion for medicine.  He earned his post-baccalaureate pre-medical certificate from Mills College in 2005 and pursued his medical training at Touro University College of Osteopathic Medicine.

During his time at Touro University he was a Global Service Health Intern in partnership with Jimma University in Ethiopia.  While in Ethiopia he served as a medical volunteer at Mother Theresa’s Home for Sick and Dying Destitute.  He earned a T.O.U.C.H. Award from the American Association of Colleges of Osteopathic Medicine for his extensive community service.   He graduated from Touro University with honors in 2012.

Following graduation, he joined Sansum Clinic in Santa Barbara, where he spent six years caring for community members as an Internal Medicine Physician practicing primary care and hospital medicine.  His time at Sansum deepened his appreciation of preventative medicine and the value of merging science and compassionate patient care.  As part of his commitment to the Santa Barbara community, he remains on the staff of Santa Barbara Cottage Hospital and Goleta Valley Cottage Hospital.

At Santa Barbara Doctors, Dr. Haig values the focused attention and personalized, comprehensive care that a concierge medical practice allows.  He especially appreciates the opportunity to spend more time with each patient, to provide care promptly, and to be accessible at all times for his patients.

Dr. Haig was born in Williamstown, Massachusetts and his loving family has deep roots in the Berkshires.  He met his wife, Malana Willis, a Santa Barbara native, when they were students at Williams College.  They love returning to Massachusetts to visit family and their alma mater, especially when the leaves change color in the fall.

Dr. Haig loves spending time traveling abroad and exploring Santa Barbara’s beauty close to home with his family.  During the weekends you can find him playing with his young children Gus and Gretel.  Riding bikes, jumping in the waves, and exploring neighborhood parks are favorite pastimes. In any remaining free time, he enjoys listening to music, cooking, reading, and tinkering with electronics.

At Santa Barbara Doctors, we are committed to providing you with the best health experience possible. To learn more about our team, health plans, and services, or to schedule a complimentary consultation, contact us today!